In the early 1960s, something was brewing over at the Wood Brothers Manufacturing Co. 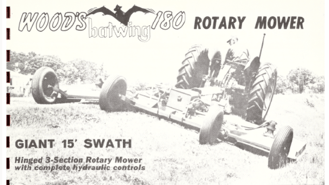 Sketches had been in the works as far back as 1958. Once again, Leonard, Keith, and Mervel found themselves on the verge of a great innovation: a revolutionary flex-wing rotary cutter with a cutting width of 180 inches. They called it the Batwing® cutter.

The first Batwing® cutter was introduced in 1963. Keith filed for a patent in 1966, which was ultimately granted in 1970. A pivotal time for the brothers, as this single innovation would secure their brand’s reputation for the long haul. The Batwing® cutter was hailed as the toughest rotary cutter money could buy, allowing mowers to tackle tall weeds and brush on rougher terrain. The product has been so successful that it’s still on the market today, almost 60 years since its initial release. 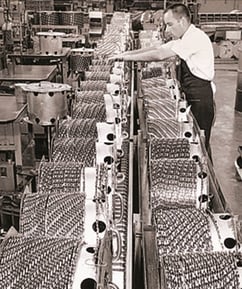 Also in 1963, Homelite (an American manufacturer, notable for being one of the largest post-World War II producers of portable electrical generators and professional and consumer level chainsaws) kicked off the modern era of portable chainsaws with a lightweight, high-speed, direct-drive model that sent shockwaves through the industry. They called it the XL-12. It was the first of its kind, and a far cry from the cumbersome saws of old. With a magnesium alloy frame, the powerhead weighed only twelve pounds. It quickly became one of the most visible and widely used chainsaws around. To match this fine piece of machinery, the Oregon® brand created the D72, the first 3/8-inch pitch chain designed specifically for compact saws like the XL-12. Both products were immensely successful, and derivative chains based on the D72 are still widely used.

The S70 followed in 1964, another fast-cutting chain and an instant bestseller. And then came the MicroGuard, also designed for compact saws but now equipped with guard links for extra safety. Like the previous guard link chains, the MicroGuard quickly gained popularity with pulpwood cutters. 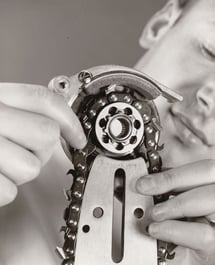 And the Oregon® brand’s innovations weren’t limited to saw chain. The PowerSharp® self-sharpening system gave users the ability to sharpen their chain in five seconds — without having to stop their work to grab a file. It achieved this feat with the touch of a button, by way of a portable, bar-mounted sharpener integrated directly into the saw. What might have seemed like a gimmick was surprisingly efficient. In fact, it was more efficient, as the system’s proprietary chain was top-sharpened, with three points of contact to the sharpening stone for a smooth, reliable grind. The PowerSharp reduced hand maintenance by 80%, cut wood up to 35% faster, and did so with a 23% longer service life.

These days you can find the system built into our very own Oregon® CS1500, which is the #1 corded chainsaw on Amazon and was named best corded chainsaw by Consumer Reports.

BUILDING ON OUR SUCCESS

Backed by the success of an expanding product line, the Oregon® brand and its parent company, Omark Industries, branched out across the globe, with shipments being made to over 30 countries. The brand was emblematic of the ever-growing American economy. It caught the attention of not only the hardworking people who used its products but also of the day’s politicians looking to connect with a growing class of voters. In 1960, an Oregon® saw chain plant provided the perfect campaign stop for then-Senator and future President John F. Kennedy. In 1964, Senator Barry Goldwater would make the rounds as well. 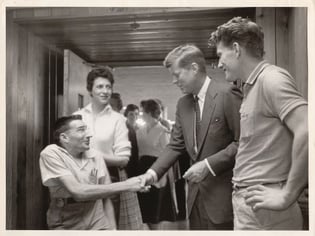 Also happening at the time, the Oregon® brand had a new plant in the works — part of an 87-acre Omark Industrial Park. This $2.5 million expansion would dedicate some 29 acres for a state-of-the-art facility with 155,000 square feet of manufacturing and administrative space. Situated between Lake Road and Railroad Avenue in Milwaukie, OR, the site was nicknamed “Celery Gardens” for the farming of celery which had once grown there. A groundbreaking ceremony was held on August 5, 1964, with Governor Mark Hatfield in attendance.

But as the year drew to a close, Omark Industrial Park would have to take a pause, as Mother Nature had plans of her own.

The Christmas flood of 1964 was a “100-year” disaster, dumping torrents of rain all across the Pacific Northwest. Nearly twenty people died in the state of Oregon alone, along with structural damage in the hundreds of millions. The waters of the Willamette River rose to well over thirteen feet, causing Johnson Creek to overflow and flood the McLoughlin Plant, which had been producing Oregon® saw chain since 1955. 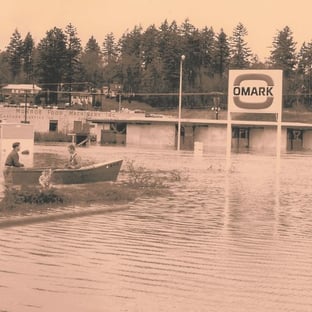 A team of Oregon® employees sprang into action. They sealed off the doors, elevated their equipment, and relayed what they could to higher ground. They spent four days waterproofing the 66,000-square-foot facility and doing everything in their power to make sure the damage would be minimal. They dubbed their efforts “Operation Batten Down.”

On Christmas Eve, at the height of the flood, the employees were forced to retreat to the building’s interior, and a local radio station announced they had lost their fight. They responded by mounting a fir tree on the roof and decorating it with Christmas lights connected to a portable generator — a bold message to show the world the plant was still in business.

Once the waters began to recede, the team brought in fifty kerosene heaters with electric fans to dry the place out. They were back in production by January 4, 1965, and it was clear to all that the plant was saved. When asked how they did it, Executive Vice President Ed Skralskis gave full credit to the employees:

There was never a question of quitting. Everyone was in it to win all the way.

With the Christmas flood behind them, the Oregon® saw chain division was able to move into their new state-of-the-art facility at Omark Industrial Park in March of 1965. Employees and guests gathered to celebrate. The new plant would be used for manufacturing saw chain, guide bars, and filing accessories. The McLoughlin plant would remain in operation for administrative and engineering functions as well as research and development.

Production continued to thrive both at home and abroad. A new facility was built in Ontario, Canada, as well as an 11,000-square-foot manufacturing plant in Bayamon, Puerto Rico, employing about 25 people. In 1965, Omark won the President’s “E” Award, the highest recognition a U.S. company could receive for making a significant contribution to the expansion of U.S. exports. And in 1966, the new Milwaukie, Ore. plant was named one of the top ten manufacturing facilities in the U.S. by a manufacturing magazine. 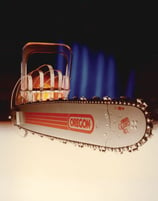 The 1960s were an amazing run, with Omark Industries overseeing multiple divisions and subsidiaries around the world. Sales skyrocketed from $13.2 million in 1960 to $79.4 million in 1969. And through it all, the Oregon® brand remained a vital part of the business, relying on the ingenuity and integrity of its employees and staying true to their core values.

In the next chapter of Oregon Tool, Inc. history, we’ll see the Oregon® and Woods® brands face new obstacles and rise to even greater heights. The 1970s will be a decade of groundbreaking technologies and further expansion into South America and Asia.