A History of Oregon Tool, Inc. through the 1970s

The history of Oregon Tool, Inc. is often defined by a series of innovations: the Cox Chipper Chain, the Wood brothers’ first rotary cutter, the PowerSharp® system, the Batwing® cutter, and the list goes on. One of our biggest achievements, however, came not in the form of a product but rather a device designed to help make our products even better.

SETTING THE STANDARD FOR SAFETY 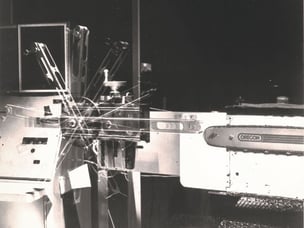 In 1970, the engineers behind the Oregon® brand began developing a new kickback test machine. Kickback occurs when a saw chain snags and a guide bar pops up unexpectedly. It’s the leading cause of chainsaw-related injury. Guard links, which were introduced by the Oregon® brand in 1959, helped alleviate this problem by blocking the depth gauge of a cutter link from hooking and grabbing smaller branches. But even with guard links on the market, kickback was still a major concern. Accidents were often part of the job, not only for professionals but also the growing number of everyday consumers using chainsaws for DIY projects at home. With its third generation finalized in 1972, the kickback test machine laid the groundwork for a safer line of saw chain, guide bars, and other products that would dramatically reduce the number of chainsaw-related injuries. 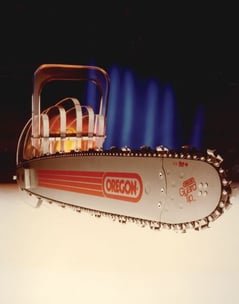 The Super 70 Series, a 3/8-inch pitch anti-kickback chain, was the initiative’s first major marketing success. The low-profile 91 Series followed in 1974, and the 76 Series in ‘76. As always, the Oregon® engineers took a holistic approach, considering the entire cutting system. Their research revealed that smaller bar-nose sizes were more effective in reducing kickback. So in 1977 they released the Guard Tip bar, also called the “banana bar” because of its asymmetrical shape. It quickly caught on with consumers.

In the next decade, we’ll see the culmination of their efforts when the U.S. Consumer Product Safety Commission pushes to get Oregon® brand safety chain on all non-professional chainsaws and the American National Standards Institute uses the Oregon® kickback test machine to provide the basis for the industry-wide safety standard known as ANSI B175.1.

MOrE PRODUCTS THAT SHAPED THE ERA 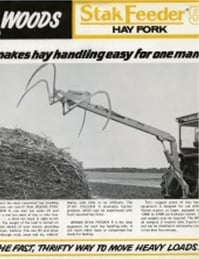 Other popular Oregon® products included the sprocket-nose guide bar, which allowed for smoother chain passage, running faster and cooler than ever before. The fast and versatile Micro Chisel chain boasted semi-square cutting edges that stayed sharper even longer in harsher environments. And then there was the uniquely shaped “Wood Grenade,” a patented wood splitter, which could be used with a sledgehammer to break up even the most troublesome logs.

Speaking of “wood,” let’s not forget about the Wood brothers. Leonard, Keith, and Mervel Wood, the founders of the Woods® brand, were equally busy transforming the farm and ranch industry with a total of eight major patents, including a patent for a lift system on an under-mount mower, in 1973, and a bale grabbing device that could pick up several bales at once, in 1976. The foundations of Oregon Tool, Inc. were only getting stronger. 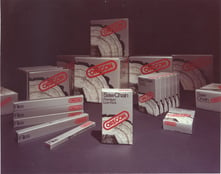 Consumer demand for Oregon® products widened throughout the decade, as the chainsaw became an increasingly important tool for homeowners. To capitalize on this shift in the market, the Oregon® marketing team devised a one-stop Firewood Center that would provide new consumers with everything they needed to get started. They introduced the concept at the 1978 National Hardware Show in Chicago, and it was a big hit with mass merchandizers.

EXPANDING ACROSS THE GLOBE

Business was booming, as the Oregon® brand continued to exceed expectations. In 1971, James S. Osterman became Oregon® Saw Chain Director of European Operations, with headquarters in Nivelles, Belgium — he would later become the CEO of the Oregon® brand’s parent company, Omark Industries. In 1972, the Canadian government invited Omark to a trade fair in Beijing. Later that year, over 200 Japanese chainsaws equipped with Oregon® saw chain and guide bars were shipped to the People’s Republic of China.

We will make every effort to do business with the Chinese within U.S. government policy limits. 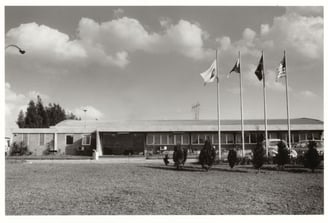 In 1975, a second plant was built in Puerto Rico, in the town of Cidra, and there was an announcement for a new facility in Brazil. The Oregon® brand had been selling products to Brazil for well over a decade. Fast-moving markets and the increased cost of tariffs made it necessary to build a plant there. The Brazilian government approved a $6 million facility for Omark and the Oregon® brand to operate as a proprietary cutting chain manufacturer. The plant was constructed in the city of Curitiba, where it is still in operation today.

BRANCHING OUT IN NEW DIRECTIONS

At this point in Oregon Tool, Inc. history, we find our brands building on their prior success and using that success to cross over into new territories. The Oregon® brand in particular managed to not only penetrate new regional markets across the globe, as with the push into Asia and South America, but new consumer markets as well, professional and non-professional alike.

It may seem like the business is moving in different directions — and in many ways it is — but with a solid foundation and an adherence to a set of core values, all roads lead back to the same starting point. From the engineers to the plant managers to the marketing team, company-wide, the stewards of the Oregon® brand anticipated opportunities for growth and proceeded accordingly. Globalization meant having a stronger distribution network and manufacturing capabilities in other countries; rising homeownership meant an increased demand from do-it-yourselfers and having an expanded product line catering to their specific needs.

In our next post, we’ll watch as our brands expand their product lines and manufacturing capabilities even further, employing new production techniques that will maximize revenue, garner accolades from the press, and attract the attention of other industry leaders looking to mirror their results.