A History of Oregon Tool, Inc. through the 1940s

Joseph Buford Cox spent the summer of 1946 locked away in the basement of his two-story, Portland home on SE 33rd Avenue. He had 800 square feet to toil with his latest invention: the Cox Chipper Chain, a new kind of saw chain that would revolutionize the logging industry and bring the modern chainsaw into the lives of everyday people around the world.

What made the chipper chain unique was that it had teeth that would curl over the top, its cutting edges pointing both left and right, as opposed to straight up, like its predecessor the “scratcher” chain, which had teeth more akin to a common handsaw. It was an idea he got from the larvae of a timber beetle, watching the mandibles of the invasive creatures as they bore through a tree stump with almost the exact same cutting technique.

Sometimes inspiration comes from the most unlikely of places.

The following year, Joe founded the Oregon Saw Chain Corporation and launched the pilot version of his chipper chain for testing. He was dismissed in those first few months, with many in the logging community labeling his operation a “gyppo” outfit, a derogatory term used for independent loggers at the time. But he stuck with it, and eventually some of them started to come around.

FROM ONE PIONEER TO THE NEXT

In the mid to late 1940s, chainsaws were still in their infancy. They relied on the scratcher chain and had to be sharpened and resharpened throughout the workday. Since they didn’t saw much better than a two-man crosscut, to most loggers they felt like a waste of time. There was one man, however, who, like Joe Cox, noticed their potential.

Jack Jamieson had been using power saws of all kinds since they were first introduced in the United States, having worked for Weyerhaeuser back in 1939 when they purchased three Stihl machines from a seller in Germany. It was Jack’s job to figure out how to operate the saws and see if they were practical.

It weighed 145 pounds and had about a six-foot guide bar. And the biggest single trouble with the machine was the chain it used.

By 1947, Jack was with the Willamette Valley Lumber Company out of Black Rock. While working as a bull-bucker up on Snow Peak, he was approached by a man named Doc Lowe. Doc introduced him to the Cox Chipper Chain and showed him how easy it was to sharpen. 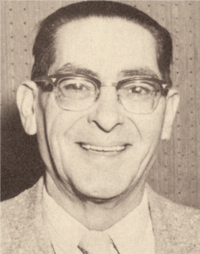 "There have been a lot of changes in the manufacturing and selling of Oregon chain, but the cutting principles and design of the chipper chain hasn’t changed."

Doc was the Oregon® brand’s first salesperson, having been with Joe from the very beginning. In the early years there were no distributers, so he covered the entire state, as well as southern Washington, selling directly to dealers and the first chipper chain users themselves. Jack Jamieson was his first sale.

Jack had claimed that one chainsaw could do the work of two men. Within a year, seven chainsaws would be doing the work of 16 fallers and 40 buckers using handsaws. It was Jack who introduced the “two-way work” method: the falling and bucking of a tree by a single man with a chainsaw. 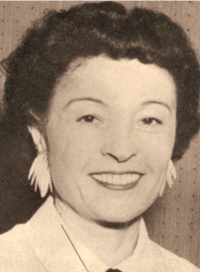 Frieda Lannon was the Oregon® brand’s first employee. Like Joe Cox, she took pride in her work and knew exactly what was needed to get the job done right. Breaking barriers in an age of male-dominated industry, she would go on to become Foreman of Chain Assembly, with up to one hundred employees working under her direction. John Mardis was employee #2.

At that time there was just Frieda, Joe, and, at times, Mrs. Cox. I remember a bad week when only three chains were sold. I was worried about my job. 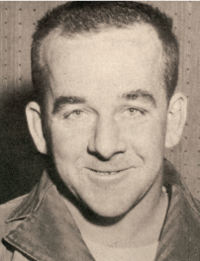 Ray Carlton became the third employee. He was hired to build a special machine, and after it was built he stayed on. Over the course of his tenure, he would take on the roles of Shop Foreman, Superintendent, Production Manager, and Chief Engineer.

In November of 1947, still running the business out of his basement, Joe had four employees working on two small assembly tables. All machining had to be contracted outside. The operation could have gone the other way, but through their hard work and perseverance the original crew set something in motion. Encouraged by the results of pioneers like Jack Jamieson, logging professionals finally started giving the chipper chain a chance, and what they found was that the new saw chain design increased their production exponentially — along with their profits.

The era of Oregon-ized logging had begun.

In 1948, sales reached $241,753 — not bad for the company’s first year. Now with 12 on the payroll, Joe moved operations to a 5,000-square-foot converted garage on North Mississippi Avenue. On the administrative side, John Gray joined the team, a 28-year-old with an MBA from Harvard. By 1949, Joe had 18 employees. They started moving product into Canada. For the original crew, these pivotal early years would later be referred to as “The Firsts.”

AN AGE OF INNOVATION

At the same time Joe Cox and company were shaking things up in the logging industry, 2000 miles away, in a little town called Oregon, Illinois — believe or not — three brothers had another innovative product in the works.

After serving their country in World War II, Leonard, Keith, and Mervel Wood were back in the states and ready to start the next chapter of their lives. They were Iowa boys, having spent their youth in their father’s machine shop, and the plan was to start a business of their own. They found themselves drawn to Oregon, IL, feeling a certain kinship with the community. And so they bought some land and built a 4,000-square-foot Quonset-type factory and three smaller buildings for each of them to live in.

They started with wagon boxes, but with steel in short supply they had to settle for making cement blocks. In search of a better product, they met a guy who designed and built a rotary stalk shredder, and they liked the idea so much they bought the production rights. But before they went into production, they began to wonder if they had jumped the gun. So they started polling farmers on whether or not the device would be useful. They even sent a letter to the agricultural department of a local university.

Rather than wait for a response, however, they put their faith into the project and invested everything they had. They built the first tractor-mounted rotary cutter, and it was a huge success. Farmers started buying them up as fast as they could be produced. You can only imagine the laugh the brothers must have had when they finally heard back from the university. They received a letter that said, “Don’t do it,” citing a lack of market.

DAWN OF A LEGACY

And so we close out the 1940s with two burgeoning brands, each ready to build on their success and expand in the decades to come, as we shall see in the articles to follow. The legacy of Joe Cox and the Wood brothers lives on, and the values that guided them are the same values that guide us at Oregon Tool, Inc. today. Their pioneering spirit can be felt in everything we do, driving us forward and challenging us to innovate and grow.